World of Cars Wiki
Register
Don't have an account?
Sign In
Advertisement
in: Non-Road Vehicles, Smokejumpers, Helicopters,
and 3 more
English

Ed Harris
Blade Ranger is a helicopter who appears in Planes: Fire & Rescue.

Blade Ranger, a veteran fire-and-rescue helicopter, heads up the Piston Peak Air Attack team. Haunted by a storied past, he’s a tough and demanding air boss with a wry sense of humor, and he’s not exactly enthusiastic about his new trainee Dusty. But Blade is a pro and does everything he can to bring the new SEAT up to speed.

As partly explained by Maru (and known by all members of his current team), Blade was a former actor for the television show CHoPs alongside his best friend, Nick "Loopin'" Lopez (both being police helicopters), until Nick was unexpectedly killed in a stunt accident during the filming of the show's 140th episode, which Blade could do nothing to save. Traumatized by this loss, he left, causing the show to be cancelled, and started working for the Piston Peak Air Attack team, an organization he now leads, as a fire chief, so that he can be a rescue service member for real. Blade at first doesn't like Dusty Crophopper since he is not meant to be a firefighter and only sent there for qualifications. During the scooping of water for retardant, Dusty ignores Blade's warning about flying too low resulting in them both being swept down a river, off a waterfall, and being trapped inside a mine to escape the worsening fire. Blade's engine is severely damaged by the heat, and is grounded for repairs while Windlifter assumes command during his absence. However, when the fire traps Harvey and Winnie at Augerin' Canyon's burning bridge, Dusty and the smokejumpers have their water supply cut off and simply have to use the remaining water for retardant, which is not enough to put out the fire Blade recovers just in time to save the two RVs while Dusty's gearbox fails completely and he crashes in the woods and is airlifted to the base. After Dusty is fixed, Blade and the smokejumpers all head to Propwash Junction to celebrate Dusty's bravery. 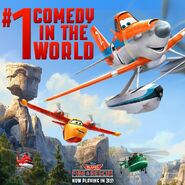 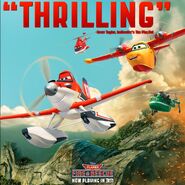