Green (die-cast)
Pink (all other appearances)

Cletus is a character that has made multiple appearances in the Cars series. He is one of Mater's cousins, and can often be found spending his time competing in races at the Rustbucket Stadium. Cletus' dialogue suggests that he is the oldest of Mater's cousins, as he sometimes refers to himself as "old-timer" and tells his opponents to "mind their elders" when he is passed. He appears to be a 1983 Dodge Aries Coupé or 1983 Plymouth Reliant Coupé.

As a child, Cletus spent time with his cousins Mater, Buford, and Judd, taking part in activities such as fishing and tractor tipping. However, the four cousins were constantly bullied by a large truck named Bubba. One day, however, Bubba threw Mater's hood into a tree, resulting in a challenge to a race against Mater. Cletus, Buford, and Judd watched the race between the two, and although the competition was close at first, Bubba had trouble turning around the statue of Stanley, causing him to lose control, leaving Mater to win the race. From that point on, the cousins no longer had to deal with Bubba's antics.

In Cars: The Video Game, Cletus only appears as an opponent in Rustbucket Race-O-Rama, in both story mode and arcade mode.

In Cars: Radiator Springs Adventures, he appears in Tow the Line, where he is one of the cousins that Mater must tow, though the player will need to acquire a hook before being able to tow each cousin. He sometimes appears with pinstripes or in a bit brighter shade of color.

In the story mode of Cars: Mater-National Championship, Cletus appears as an opponent in the first, second, and fourth Rustbucket Races. He also appears in arcade mode, as one of the randomly selected opponents in Rustbucket Races.

In Cars: Race-O-Rama, in story mode, he appears as a competitor in Smash Up 1, where he usually places from fourth to seventh. Like the other cousins in the other Cars games in which they appear in, Cletus is not playable.

Artwork from Cars: The Video Game 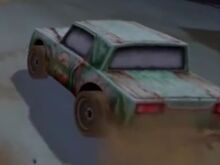