Doug R.M. is a caravan that resides in Redneck Hill. He is a 1980 Boxomatic Coach 5.0 L V-8 Motor that is painted white, with green lining. He sometimes wears a variety of Piston Cup flags on his roof.

In Cars, R.M. and Larry are seen among other caravans at the Motor Speedway of the South. While there, R.M. says "You got that right, slick!" to Larry and whistles. Later, they appear when Lightning McQueen spins into the infield after he was hit by Chick Hicks. R.M. whistles again as McQueen then returns to the track.

R.M. and Larry also attend at the Los Angeles International Speedway, where they are seen next to Albert Hinkey. When the crowd notices Doc Hudson, R.M. tells Larry to dip himself in axle grease and call him Slick.

R.M. and Larry appear in Cars 2: The Video Game, watching the races in Radiator Springs. 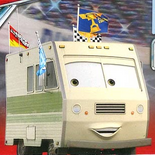