Fred is a rusty racing fan and recurring character in the Cars franchise. He often gets excited whenever a celebrity knows his name, which is actually on his license plate all the time.

In Cars, Fred is seen in the Rust-eze tent at the Motor Speedway of the South, happy due to the fact that Lightning McQueen "knows his name" even though it is printed on his license plate. He gets excited and his front bumper falls off. The same situation happens with Mario Andretti at the Los Angeles International Speedway, where Mario says his name, he gets even more excited and happily tells a security guard, "Mario Andretti knows my name!" after the police will not let him in because he does not have a garage pass. Fred says that it is okay because Lightning knows him. At the end of the film, Fred is seen hopping up and down in the main road of Radiator Springs, with tons of decals stickered onto him from Lizzie's Radiator Springs Curios shop and his bumper falls off again.

In Cars: Mater-National Championship, Fred overhears Lightning telling Philip about driving lessons, and he excitedly hurries over and asks if he can join too. After Doc complains that the three cars are blocking the street, Barry comes and asks if a race is starting and the five happily agree to one. His front bumper falls off after Lightning revs his engine. After this event, Fred is only seen during all four Rustbucket Races and also as a computer opponent in all nine Fillmore's Fuel Frenzy levels.

In Cars: Race-O-Rama, Fred can be found competing in the Rustbucket Derby levels and sometimes in the Smash Up levels as well (except on the PlayStation 2 version in which he does not appear in at all). Like his previous game appearance, Fred is not a playable character.

In The Case of the Missing Muffler, he is seen at Flo's V8 Café, talking to Lightning McQueen and Mater. The story implies that Fred is likely now a resident of Radiator Springs, as the video games were also implying.

Fred is a Stodgey Suaver ST and has a license plate that simply reads "FRED". His top speed is 49 km/h (30 mph). Fred's original livery is currently unknown, as he is completely covered in rust and he sometimes struggles to keep parts on. However, on his front bumper and the rest he has a bit of visible green and white paint.

Fred gets excited very easily, and, as a result, he often has his bumper coming off, or when he excitedly shakes so hard a large amount of rust falls off him. Whenever someone reads his license plate and says his name, Fred freaks out and shouts "He knows my name!" 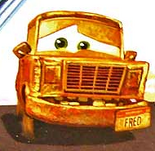 Fred with a San Bernardino sticker.