Greg "Candyman" is a Piston Cup racer who was sponsored by Tach-O-Mint.

In Cars, Greg is seen racing at the Motor Speedway of the South, among thirty-five other competitors. When Chick Hicks causes a huge accident to distance himself from Lightning McQueen, he is involved in the wreck and suffers minor damage, but is able to continue racing. He can be later seen during the restart and a bit after when Chick passes him.

Between the events of Cars and Cars 3, Greg retires, but his sponsor Tach-O-Mint does not appear in Cars 3.

In The World of Cars Online, Greg could be found as one of the opposing competitors at the Motor Speedway of the South and the Los Angeles International Speedway.

Greg is a Capitol Motors Verve XT. He is painted brown and white with many different candy designs around his body, as well as the number "101" written on his doors and roof. He also has stickers imitating headlights. 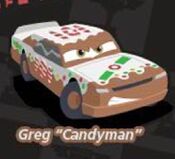 Artwork from The World of Cars Online.