Racer for the Retread team (formerly)

Haul Inngas is a race car that formerly competed in the Piston Cup Racing Series. Prior to racing in the Piston Cup, he was a racing champion in the European circuit before, but then he migrated to the United States in the early 90's and became a Piston Cup racer.

Before the events of Cars, Haul was an accomplished champion in the European racing competition. In the early 1990s, he immigrated to United States. After his immigration, he was soon heavily courted by a numerous amount of team owners in the Piston Cup Racing Series. He eventually ending up racing for Retread with the number 79. One night, he had experienced a trivial crash after driving home from the bowling alley, when he accidently drove on the wrong side of the road. During the crash, he didn't experience serious damage, although his ego was damaged in return. Later that year he won a championship in Piston Cup Racing Series.

In Cars, Haul competes in the Dinoco 400 race at the the Motor Speedway of the South, which was the final race of the Piston Cup season of that year. During the race, an accident occurred between almost all of the competitors, during which he had been sandwiched between James Cleanair and Billy Oilchanger, he wasn't able to finish the race.

Sometime between Cars and Cars 3 he retired.

In, The World of Cars Online, Haul appears together with Chick Hicks and Slider Petrolski, as an opponent at the Petroleum City Super Speedway.

Haul is a Brawny Motor Co. Spark GT race car and used Lightyear racing tires. His eye color is green. He has a light purple livery with red lining. He has the logo of Retread on his hood and number 79 on his roof and sides. 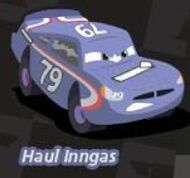 The World of Cars Online artwork.