Louise "Barnstormer" Nash is a retired Piston Cup racer who competed in the 1950s and appears in Cars 3. Her number is 94. Nash's character is inspired by NASCAR driver Louise Smith.[1] In Smith's first race, she used a Nash Ambassador, which is used for Louise's car model. She is based on a 1950 Nash Ambassador.

In Cars 3, Lightning McQueen and Cruz Ramirez meets Nash and several other Piston Cup legends while visiting Smokey's Automotive Service during his recovery. She was present in the race, where Doc Hudson had his big crash at Fireball Beach. According to River, Louise had "serious eyes" for Doc, but she simply said Doc didn't like fast women and that left her out. Louise also appears in the flashback that Doc raced in where he flipped over Leroy Heming, being one of the many racers the Hudson Hornet passed with ease.

She also participates in training McQueen, to help him get faster to beat storm. During which Cruz is modified to have a similar appearance as Jackson Storm and states that Cruz's muffler-less engine and impression of Storm works for her. Later, she reinforces the fact that Lightning is not young anymore by calling him "rickety" while watching one of Doc's old races on tape. Also during the training she tried explaining to Lightning that old Piston Cup racers ran moonshine via play-on words but disregarded her statement as Lightning still wasn't understanding what River meant by it until he flat out said they ran moonshine. After that, the legends, Lightning and Cruz all race through the forest without headlights, relying on instincts. During the final training session, Louise can be seen watching McQueen catch up to Ramirez one more time before Cruz passes him and eventually drops back. Louise and the other legends do not say anything regarding the results but have slightly disappointed looks on their faces along with Lightning.

Afterwards, Louise, Junior, and River can been seen watching the Florida 500 as spectators in the stands when Cruz flips over Jackson Storm and wins the race. She cheers on Cruz for her accomplishment. Nash is later seen at Radiator Springs with the townsfolk and her friends watching Lightning and Cruz race around Willy's Butte. Later on she gets a flame paint job from Ramone along with her friends. 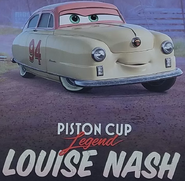 Louise with her friends in the Cotter Pin

Louise taking a lap with Cruz on the Thomasville Speedway