My Name is Not Chuck

"And my name is not Chuck!"
—Not Chuck, Cars

Not Chuck, or at least that is usually what he has been referred to as, is a small forklift who worked on Lightning McQueen's pit team, before he and the other pitties quit as a result of McQueen's disagreeable attitude.

In Cars, Not Chuck first appears when McQueen is making a pit stop at the Motor Speedway of the South. McQueen declines getting tires and orders the crew to only give him gas before he drives back onto the track. Not Chuck, however, angrily tells him that he needs tires, to which McQueen doesn't listen. However, this causes him to burst his rear tires. After McQueen, The King and Chick Hicks tie in first place, Not Chuck and the pit crew are seen changing McQueen's tires while he is being interviewed by Kori Turbowitz. He then tells Not Chuck to get out of the way of a cameraman who is trying to get a view of McQueen's bolt sticker on his TV camera. Not Chuck becomes fed up with McQueen's snobbish attitude, and he and the rest of his team quit, with one last remark: "We quit, Mr. One Man Show!" and yelling “And my name is not Chuck!” after McQueen calls him Chuck.

In Cars: Race-O-Rama, Not Chuck is an unlockable playable character that can be used Guido Kart races, a game mode that is for microcars and pitties only. Not Chuck is still wearing his Rust-eze paint job and decals, despite quitting McQueen's team four years prior though it’s possible that he still works for Rust-eze and only quit the racing team.

Not Chuck has been depicted as a stout, wide 2003 Nemomatic forklift in all of his appearances. He is painted almost entirely red, some notable exceptions being the number 95 located on his door and cap, as well as his lightning bolt design on each side of his cap. Attached to his front are grey forklift arms, useful for lifting and carrying items.

He has been portrayed with a very grouchy persona, often shouting cranky remarks at other racers in Cars: Race-O-Rama. One of his pet peeves is when people call him by the wrong name, specifically "Chuck". 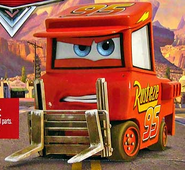