World of Cars Wiki
Register
Don't have an account?
Sign In
Advertisement
in: Places and Locations, Speedways, Piston Cup speedways, The World of Cars Online

Motor Speedway of the South

Petroleum City Super Speedway was the 4th circuit in the Piston Cup Racing Series in The World of Cars Online.

The speedway is located in Petroleum City, which is in the south center of the United States. It was opened at the end of March, 2011. You needed 640,000 racing points to compete in this track. Built on a old oil reserve, there were oil leaks all over the track, where racers could lose control. 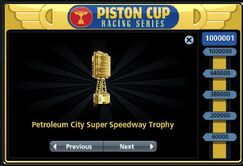 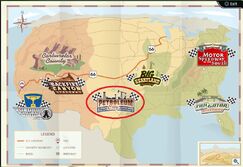 Location in map.
Community content is available under CC-BY-SA unless otherwise noted.
Advertisement