Reb Meeker is a race car that formerly competed in the Piston Cup Racing Series for the Tank Coat racing team with the number 36. He was replaced by Rich Mixon.

[[Bruce-miller-personnage-cars-3-02.jpg|thumb|220px|left|Reb Meeker and Bruce Miller during a Piston Cup race at the Motor Speedway of the South in 2016.]]In Cars 3, Reb Meeker competes in the 2016 Piston Cup season. During the midseason, Jackson Storm made his debut in the competition with an impressive win at the Dinoco 400, because of this the interest in Next-Generation race cars started to rise. Due to them having better achievements on the tracks. Reb would not fall victim of getting replaced until after the final race of the 2016 season. After the Los Angeles 500, Reb retired and Tank Coat replaced him with Rich Mixon.

Reb is a Brawny Motor Co. Spark EA race car that uses Lightyear racing tires. His eye color is blue. Reb has a pink livery with a white front bumper. He has the number 36 painted on him in the color pink with white borders on his sides and the roof and the logo of the Tank Coat on his hood, trunk and backs of his sides. 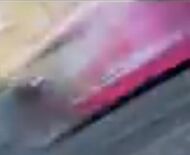