World of Cars Wiki
Register
Don't have an account?
Sign In
Advertisement
in: Trademarks, Sponsors, Dinoco,
and 6 more
English

Cars 3: Driven to Win
Rust-eze is an American company owned by Dinoco. It sells medicated bumper ointment, with a rear end formula, for cars with rusty bumpers, to eradicate rust. It was created years ago by Rusty and Dusty Rust-eze and since then became recognized trademark in the United States. In 2016, it was sold to Sterling and bought from him by Dinoco later that year.

The company was started in 1990 by Rusty and Dusty Rust-eze who were working on its flag product, medicated bumper ointment, in their mother's garage in Boston, Massachusetts. Rusty and Dusty's mother said "I couldn't be more proud of my two boys accomplishments, but I hope that their next big move would be finally to move my out of my garage." The Rust-eze brothers like to help rusty cars, almost as they like telling jokes, and that's why they invented Rust-eze medicated bumper ointment, be in the distinguished browing around the wheelwell or the bumper that's completely falling off, Rusty and Dusty are there with a cane of Rust-eze to fix it, or at least ease the burning, itching and soreness that plagues so many cars. The brothers expanding their business as a sponsorship to Piston Cup series, sometime in the 1990s, and they first car were sponsored, was the racer with the number 67, who also became their spokescar. In more than 10 years Rust-eze became a recognized trademark in the United States. Rust-eze also hired multiple delivery trucks, including the 1980s era Mack Super Liner truck named Mack. In 2005, the company announced a casting to new face of marketing captains, which was won by Lightning McQueen. The same year, the company's racing team, Rust-eze Racing joined the Piston Cup Racing Series with the number 95 and McQueen as their racer. His racing achievements gave the brand huge publicity and a fan base focused around the racer the racer, and Rust-eze products through the racing season. They would organize fan meetings with McQueen during they would tell a joke to the spectators, while awaiting Lightning's speech. Between a 10 year period the race car won 7 Piston Cups. In 2016, after the crash of McQueen during race, the company was sold to a businessman named Sterling. The new owner built the Rust-eze Racing Center where Next-Generation racers began training to become the new Rust-eze representative in the Piston Cup Racing Series after McQueen's retirement, who decided to take part in the 2017 Florida 500 before ending his racing career. During the race, he taps out and switches with Cruz Ramirez, who wins the race. After that, McQueen temporarily retires and the company was sold to Dinoco making Rust-eze a subsidiary of Dinoco.

The flagship product of the company is the medicated bumper ointment, with a rear end formula. The product guarantees a shiny result instantly. However the actual results may take up to 36 weeks.

The team had many different workers. In 2005, Lightning fired 3 crew chiefs, one which was named Chuck and after that Doc Hudson started working as his crew chief. The original team of pitties quit the team at the end of the 2005 season and were replaced by Radiator Springs residents for the race at the Los Angeles International Speedway and future races afterwards. During the team's entire history Mack was working as the transporter. 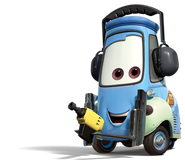 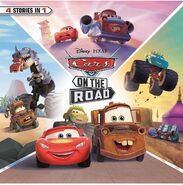