Piston Cup racer for Re-Volting (former)
T.G. Castlenut is a race car that formerly competed in the Piston Cup Racing Series for Re-Volting's racing team with the number 48. He was fired by Re-Volting's owner and replaced by Aaron Clocker mid-season.

In Cars 3, T.G. Castlenut competes in the 2016 season of the Piston Cup Racing Series. During the mid-season of that year, Jackson Storm made his debut which caused sponsors to fire veteran racers and replace them with Next-Generation race cars, that had better achievements on the tracks. Due to this, T.G. was forced to stop competing in the Piston Cup and Re-Volting replaced him with Aaron Clocker.

T.G. is a Brawny Motor Co. Spark EA race car with Lightyear racing tires. His eye color is blue. He has a red livery with a black hood, trunk and bold stripes on the sides. He has a white and gray roof. He has the number 48 on his sides and the roof with a red trim and the logo of Re-Volting on his hood, bumper, back and sides. 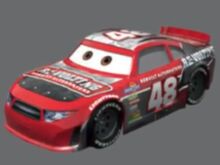 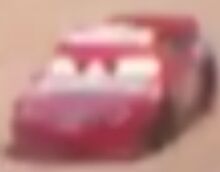 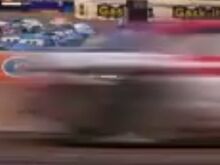 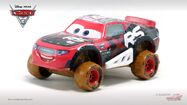