Cars 3
Terry Kargas races for the TripleDent team in the Piston Cup Racing Series. His number is 31.[1]

In Cars 3, Terry competes in the 2016 Piston Cup season alongside the likes of Lightning McQueen, Cal Weathers, Bobby Swift and Brick Yardley. However, as Jackson Storm makes his debut in the Piston Cup, racing teams spark interest in having Next-Generation race cars compete for them. Terry most likely retires and gets replaced by a Next-Generation racer named Cam Spinner. 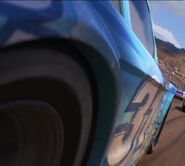