Cars on the Road (upcoming)

Todd is a recurring character in the Cars franchise. He is a Gyoza Poky 2.4 Liter Inline 4 who works as a delivery truck for the Pizza Planet restaurant chain, delivering pizzas and air filters to residents of California.[1][2] He is also interested in demolition derby racing, having taken part in the Thunder Hollow Crazy Eight on at least one occasion.

In Cars, having obtained free tickets to the Dinoco 400 Piston Cup tie-breaker, Todd attends the race at the Los Angeles International Speedway. He is among the crowd of cars behind Darrell Cartrip and Bob Cutlass while they are filming a report for the Racing Sports Network near the stadium's entrance.

Earlier in the film, a Pizza Planet truck can be seen in the background when Mack and Lightning McQueen are leaving the Motor Speedway of the South. The truck could possibly be Todd or another Pizza Planet employee.

Todd has two brief cameo appearances in Cars 2. He first appears on the Tire Talky television show, which is being shown in the Wheel Well Motel during McQueen's date with Sally. He is later seen as a spectator at the Radiator Springs Grand Prix.

In Cars 3, Todd takes part in the demolition derby race at Thunder Hollow Speedway. Starting with the racing number 07, he is bumped into a wall by Superfly and consequently eliminated from the race. Upon crashing, the model of the rocket ship on his head falls off and is caught by a forklift in the crowd.

In the Cars on the Road trailer on the 1:28 timestamp, we can see Todd dancing with other trucks.

Todd is a Gyoza Poky 2.4 Liter Inline 4. He is painted in a yellow and white livery, and he wears the Pizza Planet logo on both of his doors. He has the rocket ship representing Pizza Planet atop his roof. In the demolition derby, he appears with the number 07.

Todd on the Cars 2 poster. 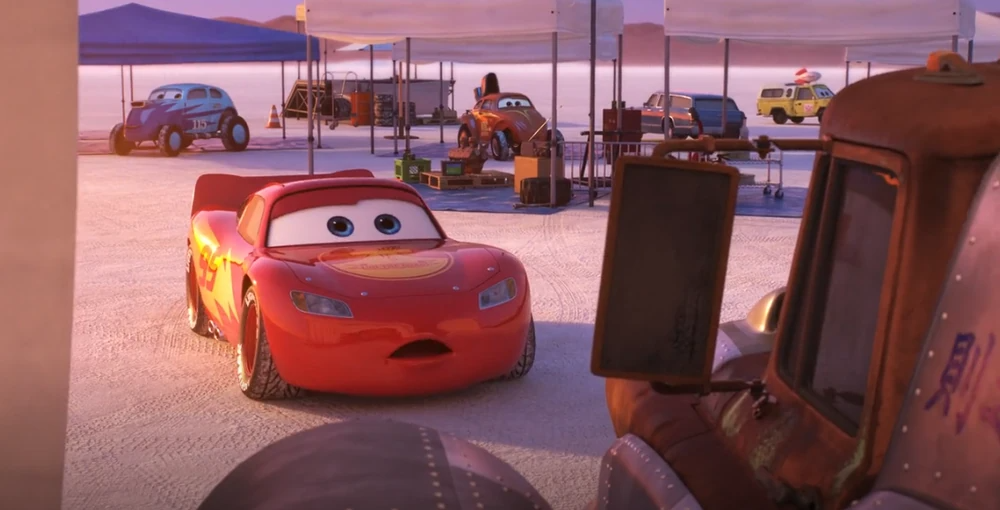