World of Cars Wiki
Register
Don't have an account?
Sign In
Advertisement
in: Places and Locations, Cities, Japan,
and 6 more
English

Tokyo is an Asian city located in Japan. Tokyo was the place where the first race of the World Grand Prix was run and where Mater met the secret agents Finn McMissile and Holley Shiftwell; they mistook him for the American spy Rod Redline.

Tokyo was first seen in Tokyo Mater, where Mater raced against Kabuto to the Tokyo Tower to become the drift king, and the setting of the whole story that Mater tells Lightning McQueen.

Tokyo (Japanese 東京都 Tokyoto "eastern capital city") is the capital of Japan. The numerous colorful advertisements that abound in its center give the town a distinctive look at night. It hosts the first of the three races of the World Grand Prix, as well as the competition's welcome party. Unlike the other races that take place during daytime, the Tokyo race takes place at night. The track is in the town's streets and passes on the Rainbow Bridge and also past the Tokyo Imperial Palace. It also includes a dirt section. It is also where the first three cars flame out. 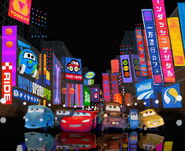