Tomber (pronounced “Tom-Bay”) is a dubious little French car with an unusual, and very unstable, three-wheeled design that befits the meaning of his name - to fall. By trade he deals car parts from a stall in a Parisian market - through his questionable merchandise source have led to his reluctant acquaintance with British secret agent Finn McMissile.

In Cars 2, Tomber is seen at the Marché Aux Pièces located in Paris, talking to someone when he spots Finn McMissile's reflection through a mirror. As he spots him, Tomber makes a run for it which leads to a chase. Tomber then crashes and is zapped by Holley Shiftwell. Finn stops her, and Tomber scolds Holley for not knowing his identity. Tomber is then dragged by Mater to a more discreet area. There, Tomber helps Finn and Holley by giving them info on some of the car parts in the photo they show him of the head of the lemons. Tomber and Mater hit it off right away because of them mutually respecting the other's knowledge of engines and parts.

Tomber is an unlockable playable character in Cars 2: The Video Game, unlocked once access to Clearance Level 6 has been granted.  He is a light weight vehicle, with lots of speed and little power.

Tomber is painted dark blue, with three wheels and chrome ornaments. He has a grey bumper, along with a small amount of rust on his body.

Tomber largely resembles the English Reliant Regal three-wheeler, but also bears similarities to a French Citroën AMI 6, most notably in his double-headlight structure. The Citroën DS also seems to have been an inspiration, mainly for the position of his rear turning indicators, which are situated in the upper corners of his rear window.

John Lasseter said about Tomber's design : "we made up our own [three-wheeler]. I love French auto design of the early ’50s, ’60s, early ’70s of Citroëns, Renaults, and Peugeots. They’re so unique. So we kind of pulled from a lot of our favorite older French cars and kind of merged it together into this car."

Tomber's license plate is PCS NO1R, an abbreviation for the French "pièces noires," a reference to the black market parts which he deals. Strangely, in Cars 2: The Video Game, it reads 3PNY BIT.

"I was always wondering why he needed so many parts, now I know." - Cars 2

"Gremlin, Pacer, Hugo, and Trunkov never get together!" - Cars 2

Error where it CLAIMS that he's a villain. But he's not. 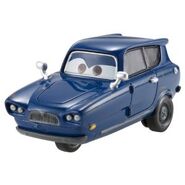 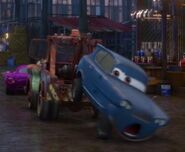 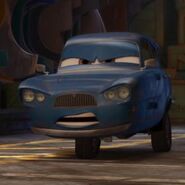 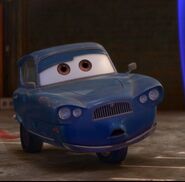 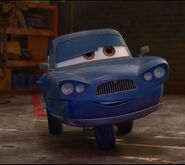