""What? No friend of mine will stay in a hotel in-a my village. You will stay with my...
Uncle Topolino-o-o-o!"

Uncle Topolino is a tire salesman who resides in the small village of Carsoli near the city of Porto Corsa, Italy. He is Luigi's uncle, and served as a mentor to Luigi and Guido, who would later open their own tire shop in the town of Radiator Springs.

In Cars 2, Uncle Topolino and Mama Topolino greet the members of Team McQueen, who are staying with them while awaiting the second World Grand Prix race, which happens to take place in Porto Corsa. When Lightning McQueen is feeling bad about yelling at Mater, Uncle Topolino gives him words of wisdom, explaining about how Luigi and Guido used to constantly get into arguments, but in the end, they would always make up and resolve their problems. He then strolls off with Mama Topolino.

Uncle Topolino also appears as a downloadable playable character in the Xbox 360 and PlayStation 3 versions of Cars 2: The Video Game, and can be purchased as part of the Cars 2 Character Bundle for $2.99, or separately for $0.99. He is a light character, and has higher speed than he does power. Like The Queen, he can only be used in races, and not battle races, attack, survival, etc.

Uncle Topolino also appears in the comic, Family Secret, in which he listens in as Mama Topolino shares a secret recipe with Luigi and his friends.

Uncle Topolino is a 1937 Fiat 500 "Topolino" that is painted maroon, with a black undercarriage and black wheel wells. His rims are chrome and maroon, as well as his headlights being chrome. He has a license plate that reads "GE-18 31A6", and, like his nephew, he wears a black toupee.

Uncle Topolino is kind and caring, as well as a very wise individual who is good at giving advice. This personality trait is parodied in a Cars 2 advertisement, where he appears on a television show called "Dr. Fill it Up", a parody of Dr. Phil, a real television show about a man who gives advice to others.

Uncle Topolino in the garage in Cars 2: The Video Game 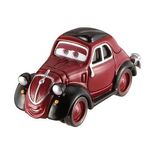