Winford Bradford Rutherford is a race car that raced for the RPM team in the Piston Cup Racing Series. He is a Capitol Motors Verve XT, which resembles a Ford Taurus. He is painted yellow, with the RPM logo on his hood. He had the number 64 and Piston Cup sponsors on his doors. He has a blue spoiler, and blue rims, with yellow on the outside.

In Cars, Winford appears as one of the thirty-six competitors at the final race of the season at the Motor Speedway of the South. After performing a PIT maneuver on Lightning McQueen, Chick Hicks finds himself a considerable distance ahead of him, but further increases the gap by bumping Winford into Murray Clutchburn, and it quickly becomes a crash consisting of all racers except for The King, Chick and McQueen. During the crash, he got hit by Ralph Carlow. But he doesn't suffer any major damage from that and continues racing. He finished in the 18th position.

At some point between Cars and Cars 3, Winford retired, and Bruce Miller became the new RPM racer. 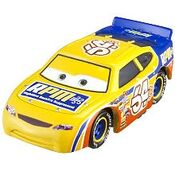 Winford in a comic.

Winford on the cover of a comic.